Co-writer and -editor of Being Public. How Art Creates the Public (Valiz, 2017)
Being Public investigates, 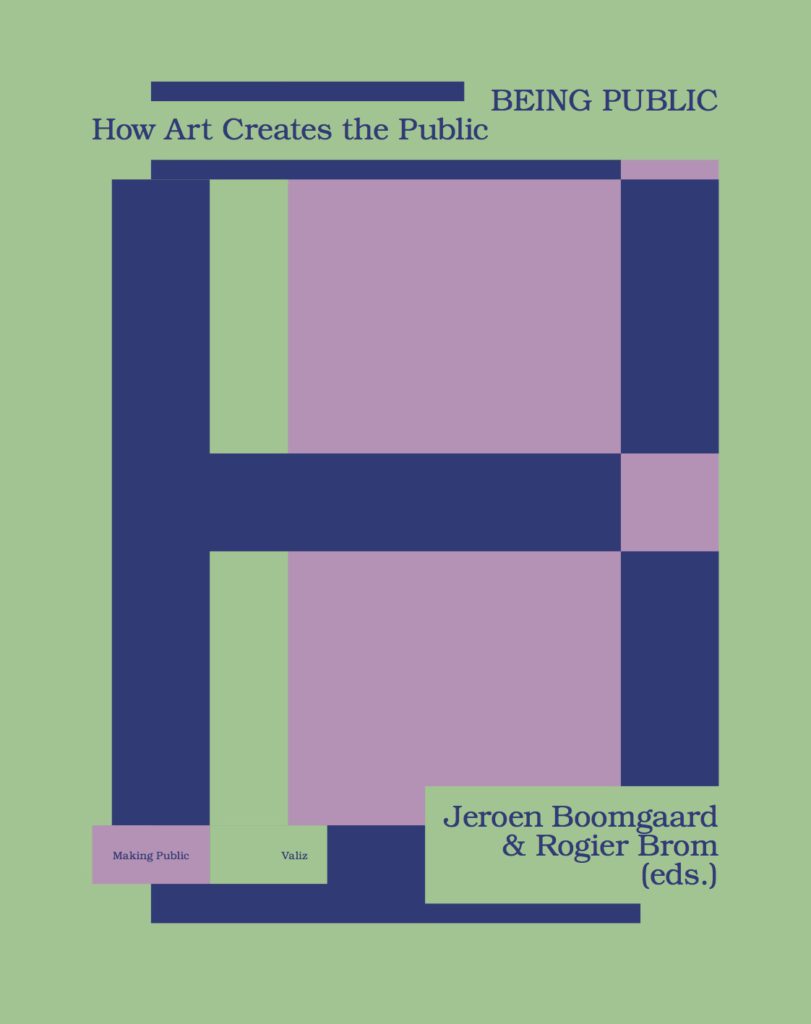 from different perspectives, the notion of ‘public’. ‘Public’ is one of the most issued categories in current debates on culture, yet the notion itself remains largely un-reflected. The meaning of both ‘art publics’ and ‘public space’ have become complex in a time where boundaries between public and private are shifting, and where ‘the public’ actually comprises different groups of changing composition and identity. What does it mean to be public today? And what is the role of art in constituting both ‘public space’ as well as ‘a public’?

Researcher project Jaap van der Meij (April 2016 – March 2017)
Tresoar, Gerrit Rietveld Academy Amsterdam, Minerva Academy Groningen, RCE
This project sets out to approach art in public space from a variety of perspectives, headed by Tresoar, a heritage foundation in the Friesland province. In the part of the project I’m involved with, researchers from the Rietveld Academy, Minerva Academy and the RCE (the state’s Cultural Heritage foundation) attempt to develop meaningful methods for estimating the value of art works in public space.

Member knowledge network of The Lectoraat Art & Public Space (July 2014 – May 2017)
Gerrit Rietveld Academy Amsterdam
In preparation of the publication Being Public, which I will be co-editing with Jeroen Boomgaard PhD and will be published by Valiz Publishers, I am a member of the ‘knowledge network’ that’s connected to the LAPS. LAPS stimulates research and theoretical reflection on the role of art and design in the public domain. The Lectoraat is the result of a partnership between the Gerrit Rietveld Academie (GRA), the Sandberg Instituut (SI), the Universiteit van Amsterdam (UvA), Foundation for Art in Public Domain (SKOR) and the Virtueel Museum Zuidas (VMZ).

Coordinator of Guided Tours and Group visits (May 2010 – present)
Centraal Museum Utrecht
Within the educational department, the coordinator of guided tours and group visits is the go to person for groups that want to visit the museum, either with or without a tour guide. Furthermore, the function entails managing the tourguides, stimulating acquisition for the educational programs and cooperating in the development and realization of new educational projects.

Researcher Centre for Research and Innovation (August 2015 – January 2016)
Hoge School voor de Kunsten Utrecht
At the Centre for Research and Innovation I was one of two researchers that scanned the position of research in the curriculum of the various schools of the art academy HKU in Utrecht. In this project we developed a system to specify a broad range of research skills and research activities that were – deliberately of not – included in the courses that were taught at BA-level.

Guest lecturer (September 2013 – December 2013)
University of Amsterdam
Helping in the design and teaching of a new course with students from the UvA, KABK (Interactive Media Design) and the Haagse Hogeschool (Industrial Design). The course focused on the development of visions for a future on technology in the arts. This course was initiated from a project by the STT (http://stt.nl/projecten/kunst‐techniek/) that investigate future visions on technology and – in this case – the arts.

Teacher art history (February 2012 – December 2012)
University College Utrecht
Developing and executing the content and didactic framework for the  course Modern Art (level 300) at University College Utrecht. Prime directive is to have the students recognize the methods used in the history of modern art and feel comfortable using them. The students are also actively stimulated to give shape to theories of their own and find ways of supporting them. Besides this course, I taught the course Introduction to Art History (100).

Teacher art history (September 2012 – October 2012 and February 2011 – March 2011)
Hogeschool voor de Kunsten Utrecht
Teaching art history to second year students Fine Arts and students of the ‘basisopleiding’. Responsible for the content and didactical methods applied. Goal was to activate the students in gaining an understanding of the use of theoretical knowledge for their own practice. Knowledge input was actively combined with discussion and presentations on the students’ own work.

Head PR/Communication (januari 2010 – januari 2012)
Expodium (www.expodium.nl), Utrecht.
At Expodium, I was responsible for translating the theoretical framework surrounding the activities to a communications strategy. I accompanied the transition from a exhibition space to an organisation with activities on multiple locations, including the public space. This coincided with an implementation of social media, restructuring of the website and constructing a strategy for the use of guerrilla marketing. Furthermore, I was involved with production activities, the selection of artists and projects and the forming and evaluation of the theoretical and methodological policy.

Experimenting on the experiment, Rijksakademie

Are we to mark this day with a white or a black stone, Rijksakademie

‘Where there is space…’, in: Sculptuur Studies, Sculptuur Instituut, Scheveningen 2007.